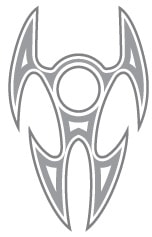 1892 – A Local bullock drive called Stan McGregor, was forging a trail from Smithfield to Kuranda during the monsoonal rains, when he became stranded on a peak known as Saddle Mountain. He was near dead when found by a local Aboriginal tribe and nurtured back to health. Despite their warning of the dangers involved, Stan left the tribe and forged onto Kuranda, never to be seen again.
1927 – A local timber cutter was felling timber on the high peaks behind Smithfield when he discovered a hideous sight, an old saddle with a scrambled message carved roughly into the leather wedged high in a rainforest tree. The message read “Something is here, something is stalking me” – there was also a strange paw like symbol alongside the words.
1962 – A surveyor working in the misty rainforest peak behind Smithfield, came across the remains he believed to be bullock bones and harnesses, scattered underneath a rocky ledge. Not far from this evil lair, he noticed a panther like animal stalking him from the slopes above. He quickly made it to a trail that lead to a waterfall, where he dived into the water and made it to safety. Since that day all attempts to find evidence of this illusive creature have failed.
1992 – While cutting trails through the Smithfield hills, Glen Jacobs president of the local mountain bike club, discovered a strange sabre toothed skull which he believed belongs to the conspicuous legend. Aboriginal legend talks of a sabre-toothed rainforest cat named the minjin, which means “Mountain Devil”
Now – The legend of the minjin lives on, and many who dare to ride alone return with stories of noises strange shadows, and the feeling of being followed, in the rainforests of the Smithfield trails.