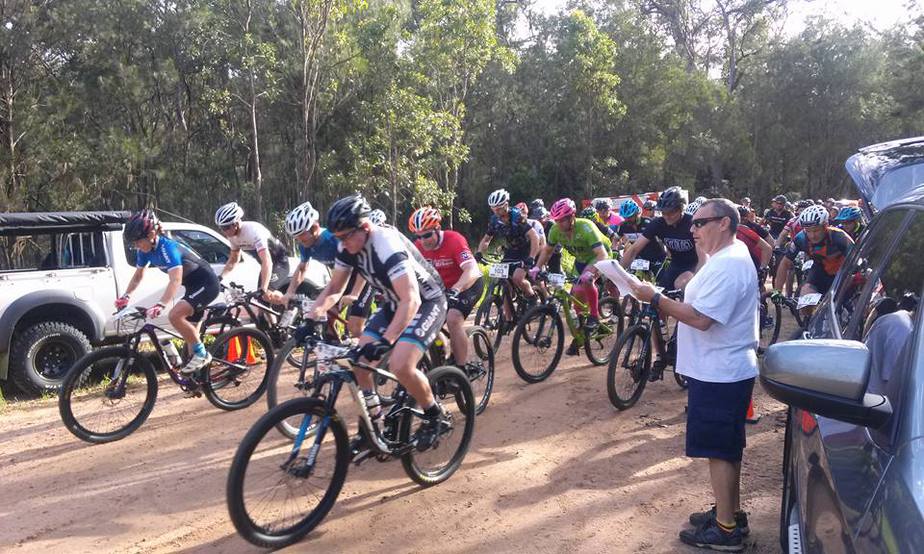 After rain most of the week Atherton and Mother Nature found it in its heart to bless the 1st round of the Prime Constructions 2017 FNQ XC series with sunshine.  The tracks were prime, with a little bit of water flowing in the creek crossings, and the ever present croc hiding in Georges Pool.  The race was using sections of trails 1,2 and 3 of the Atherton Forest Mountain Bike Park, a 7.1km course set and prepared by the Atherton Crew, big thanks to Jeff Green and Knowlesy for their efforts with trail setup. A course that appeared deceptively flat but competitors were to find out rather quickly there was a climb hidden amongst the fun.

A massive 93 competitors were registered to race and organised and filed into race categories by the ever efficient timing team of Rudi and Megan for the Mareeba Mountain Goats. No easy feat.  The day was upon us, riders were ready and broken into 4 waves for the start.  Elite male to start first.  It was apparent from the start that the continued rivalry of Townsville versus Cairns (Rubach versus Hoyle) would be on again today.
With 14 categories to be contested it was going to be a big day of racing.  8am sharp the first of the waves is off at a hectic pace.  by 8:06 all riders are on track.  After 20minutes and 19 seconds Dominique Hoyle (Giant-Bicycle Centre) is leading the Rubach brothers (Rocky Mountain – Crankd Cycles) and Bernard Cosser-Smith (Astute Financial-Trek Racing) in elite male.  Anite Narula (Giant -Bicycle Centre) is dominating the female elite.
With a massive cross section of riders from Cairns, the Tablelands, Townsville and as far away as Mackay the pace was frantic in the start but it was apparent on the second lap that the sneaky long climb, hidden in trail 2 and 3 was taking its toll on the riders as full pace. With Gary Perkins (Bike Central on Mulgrave) marshalling the road crossing at the exit of trail 1 into trail 2 pointing out with the quote of the day:  “They were all smiles last lap but it seems they are not smiling anymore, i think this next bit hurts.”
The end of the race saw Dominique Hoyle (Giant- Bicycle Centre) dominate the Elite Male race with a convincing 2 and half minute win over the Rubach brothers from Townsville (Rocky Mountain – Crankd Cycles) in second and third. Anita Narula (Giant-Bicycle Centre) took out the elite female.  Gavin Scott (Giant – Bicycle Centre) taking out the Master male on a single speed. Travis Cummings taking out the hotly contested U15 Junior males and Richard Knowles from the Atherton Club taking out the Super Master Men. Veteran male taken out by the notable return of Brett Welch, a long time away but seems to have picked up where he left off, in winning form.
Full results for the day are now available with times and fastest laps for each category.  Big thanks to the Atherton Club for all of their assistance in putting the day together, in particular to the volunteers who manned the course and the ones who fed us with the best cooked sausages in the world.
Registrations are now open for round two of the Prime Constructions 2017 FNQ XC series to be held at Cardwell on the 26th of March.
Link to register is here:  https://online.mtba.asn.au/ERegister.aspx?E=3628
Look forward to seeing you there.
Next Post