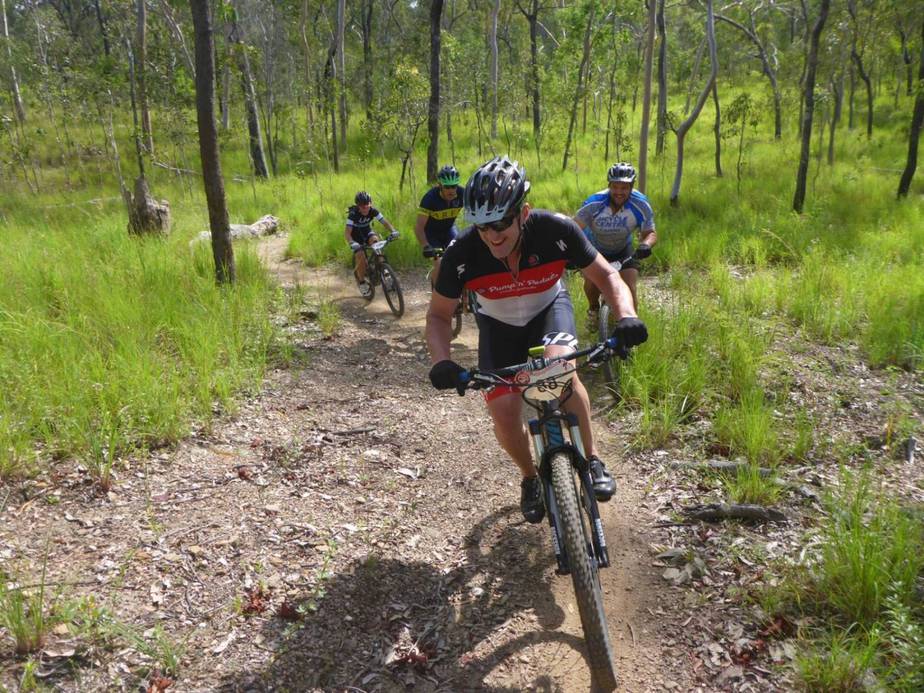 By DC Super AdminApril 10, 2017News
No Comments
XC Round 3 2017 – category results
XC Round 3 2017 – lap records
Round 3 Prime Constructions FNQ XC Race Series 2017: Davies Creek:
Sunday April 9 2017 and a crowd of 71 riders embarked on the journey up the hill to Davies Creek Mountain Bike Park, home of the Mareeba Mountain Goats MTB Club for the running of the 3rd round of the Prime Constructions FNQ XC Series for 2017.   A false start to round 2 in Cardwell due to Cyclone Debbie meant the riders had a longer break than expected.
No such problem for round 3 with the sun out, this is Mareeba, 300 sunny days a year.  Riders from as far afield as Townsville again showed up to test their skills and fitness.
In the Elite male category we saw the return of Lincoln Carolan (Merida-Bicycle Central on Mulgrave) returning from his 3rd place in the MTBA National XCO series, the Rubach Brothers (Rocky Mountain – Crankd Cycles Townsville) and unstoppable Dom Hoyle (Giant – Bicycle Centre Cairns). The Elite female also had a local favourite returning in Sarah KAEHLER (BMC – Bicycle Central on Mulgrave) and her sister Anita Narula (Giant – Bicycle Centre Cairns) with Kath Deed (Trek-Discovery Cycles).
Vet Men saw Shawn Garraway and Brett Welch as the ones to watch, with Peter Craig, Warren Pike and Rod Tindale in the Super Masters. Masters Male had a huge rider base and the over 60’s men, and even over 70’s were present.
The ladies categories were a little thinner but still racing hard.
By 9:04 all riders were on course and the Mareeba Mountain Goats President, Steve Soda had the timing tent ducking for cover as he tried to dispose of a wasp nest under the timing table with an aerosol can and lighter.  What could possibly go wrong?
In 20mins and 9 seconds Dom Hoyle stamped his dominance on the Davies Creek round with the fastest lap, leading by 30 seconds and managing to stretch it out to a 1minute and half in the 4 laps to take a comfortable win.  The real battle was between the Rubach boys and Linc Carolan with an unfortunate chain snap on lap 2 ending Jeffs day with Dan then left to battle Linc alone. After losing 20 seconds at the finish of lap 3 pulling a stick out of his rear wheel Linc managed to fight back and take Dan on the line to grab second spot for the day.
The elite female saw Anita Narula take the lead in lap 1 and was never headed with a strong finish ahead of Sarah Kaehler and Kath Deed taking up the remaining spots.  Sport ladies saw Claudia Pudelko take the win from jade Clohesy and Jodi Brown take the Masters Women.
The Brown family took double honours for the day with Jodi’s husband Paul, taking out the hotly contested Masters male ahead of Hamish guy and Peter Bridgewater, no mean feat given there were 17 riders in his category.
Vet male had a change of fortunes with Shawn Garraway taking this rounds win from Brett Welch, ahead of Adrian Tarca.  This should turn out to be an interesting series with these two guys taking a round each in the early part of the series.
Harry Sandilant took out the U15 male and Travis Cummings the U17 male.  Sport male was a close race with Nathan Clohesy taking the win from Nathan Granata and Brett Carlsson with only a couple of minutes between each rider. That also meant another successful family day with the two Townsville riders on the podium (Jade in the Sport Women as well).
Super Masters Male was very close with only a matter of seconds between eventual winner  Warren Pike only just squeezing out Peter Craig and Rod Tindale making up the 3.
The grand masters males saw Joel Groberg take the win, with a best lap of 25.45 from john Koerner and Glen Mills.
Big thank you to all the Volunteers and particularly Mareeba Mountain Goats who prepared a brilliant course for round 3.  Thanks to all the riders for taking part and a shout out to those who travelled far and wide to race up here. A special thanks to our Sponsor Prime Constructions for their support.  The series has $2000 in prize money plus other prizes for the series wins and places that will be decided at Smithfield MTB Park on 21 May.  Keep that date free.
Don’t forget that round 2 has been re-scheduled to Saturday the 22nd of April at 2:00pm, the registration link is still open at  https://online.mtba.asn.au/ERegister.aspx?E=3628
so make sure you register and get down to Cardwell and support the series and the Cassowary Multisport Club.
Next Post